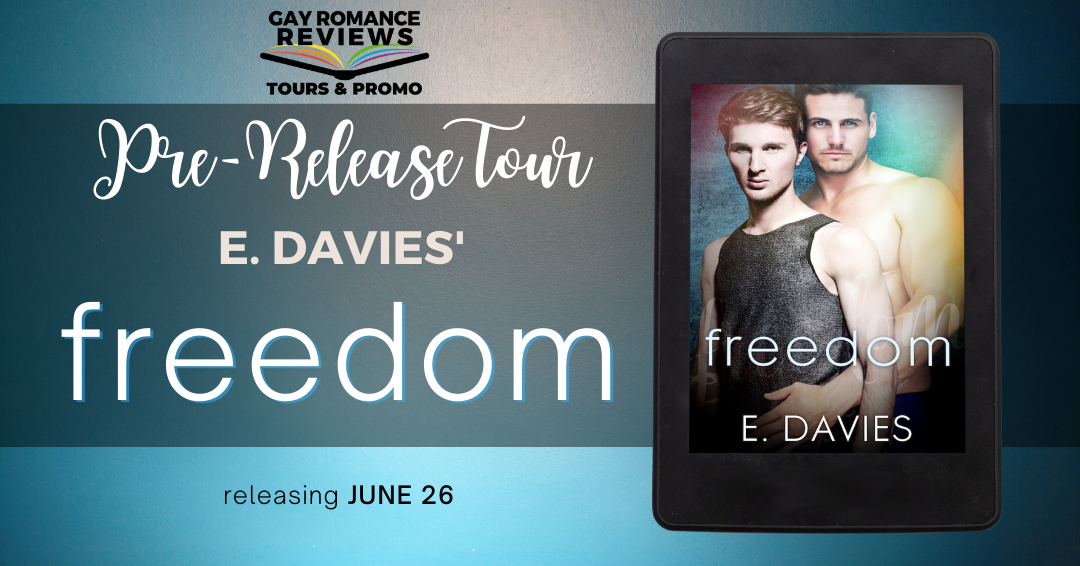 Agoraphobe Jaden has barely left the house in years. Being dragged to a gay bar by his big brother to bid on a blind date is not his idea of a good time. But then the unthinkable happens: he wins. Sure, he was just about ready to push his boundaries–but on his own time. Not with a probably-gorgeous stranger watching his every move.

Henry hasn’t been on a date in the last year–ever since he finished with lower surgery. He works as a nature guide now in the great outdoors, and his new life suits him just fine. Just one thing’s missing: a man to share it with. Jaden is sweet, accepting, yet terrified by everything about the date that isn’t Henry. But he sees something in Jaden–in his courage for showing up, and his hope and vulnerability along the way.

Back home, when he’s in Denver in between guiding trips, Henry quickly becomes a staple in Jaden’s home. With Jaden’s understanding, Henry grows confident in his own skin. And with Henry’s support, the walls of Jaden’s sheltered life open up. But every step forward seems like it comes with two steps back. Can they take a deep breath and step into the wide open future–together?

This novel is based on “Denver” — a short story from the Heart2Heart 2 anthology. It has been revised and significantly expanded. It is now a standalone gay romance novel with a happily ever after ending and no cliffhanger.

“I don’t know why I’m agreeing to this,” Henry muttered. Being grumpy was a lot easier than admitting to the nervousness that made his heart pound and hands tremble.

They’d only just gotten back from three days in the backcountry of Colorado, right in time for Henry’s flight. He and his mysterious date were flying to Phoenix first, then being driven in a limo to the canyon. Fancy as hell.

Trip had dropped Henry off at home, but unfortunately he’d stuck around to harass him under the guise of helping him pack.

“Because you need a hot man in your life.”

“Do I?” Henry scratched the back of his neck as he opened his closet and shoved aside the hangers of waterproof layers and thermal wear.

What did he wear to hike and bike around the Grand Canyon with a total stranger he wanted to impress?

Agreeing to let Trip choose a date for him in the raffle had been a bold move. Hell, agreeing to go to this event at all had been.

Henry paused and looked over his shoulder for a moment. Trip was a smart guy, and he had a big heart. It meant a lot that he’d never batted an eye at Henry being gay. But even so, he’d never told Trip that he was trans.

For the last few years, Henry had been living stealth—without telling anyone his history. Everyone knew him as a guy now. With no inconvenient ties with his past life to haunt him, he was just treated like any other guy.

For the most part, he loved it. No barrage of well-meaning but wrongheaded questions about when he knew or why he had to do it. Nobody treating him differently or tiptoeing around him.

Henry deserved the same amount of privacy as anyone else. He wouldn’t dream of asking Trip if he was circumcised or their boss, Damien, what his embarrassing childhood nickname had been. Why should anyone else ask him that kind of stuff?

But there was the inconvenient fact that his transness had become some big secret without his really meaning it to. He didn’t exactly want it to be a secret. He just didn’t want people associating him with the person the world had once mistaken him for. That lie was dead and gone. This was his truth.

But try explaining that to a stranger on Grindr who just wanted to know if he was a top or a bottom, and how big his dick was. Anything outside that box? Too complicated for them. It was even scarier to contemplate losing Trip as a friend over it.

Maybe this date was all too much of a risk. But he was committed now. Too late to turn around.

“Shit, I dunno,” was Henry’s conclusion.

To celebrate Pre-Release of Freedom by E. Davies, we are giving 2 lucky winners the chance to win e-copy of Freedom, ahead of the release!

Since 2013, E. Davies has crafted feel-good stories of men in love–stories that are brimming with hope, found families, and realistic guys next door getting their modern fairytale endings. As for hobbies: rescuing bees, dancing badly, traipsing through meadows, and studying photos of cute guys for research totally count, right?