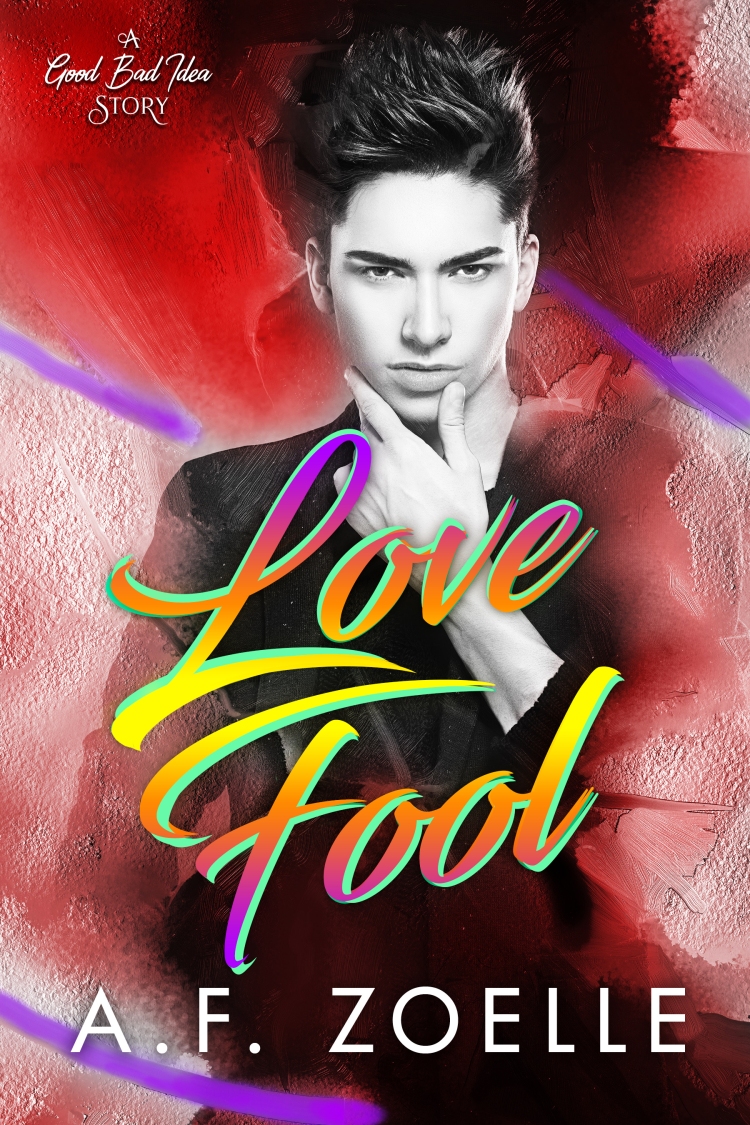 Everybody thinks my best friend is in love with me, including my cheating ex-boyfriend. When I have to see that jerk at my boss’s wedding, bringing Jules as my fake date is the perfect revenge. But why stop there? After all, if everyone is going to accuse Jules and I of being together, why shouldn’t we enjoy ourselves as friends with benefits?

Ohhhh, it’s because our arrangement makes me fall in love with him for real. Oops?

I’ve ignored my feelings for Xander so many years that I’m convinced I only love him as a friend. It’s totally a coincidence that thinking of him with his awful ex-boyfriend makes me burn with raging hellfire, right? When we’re fake dating, I’m obviously going to have fun teasing him with obnoxiously cutesy nicknames, like calling him my pookie—crap, I’m actually in love with Xander, aren’t I?

How do you tell your best friend, “Surprise! I just figured out I’ve been stupid in love with you forever,” without sounding like the world’s biggest idiot?

Love Fool is the fourth book in the Good Bad Idea series. This novel features a friends to lovers and fake boyfriends romance. Full of cute sweetness and sexy fun, every story ends with a satisfying HEA and no cliffhangers. Each book can be read as a standalone or as part of the series in order. 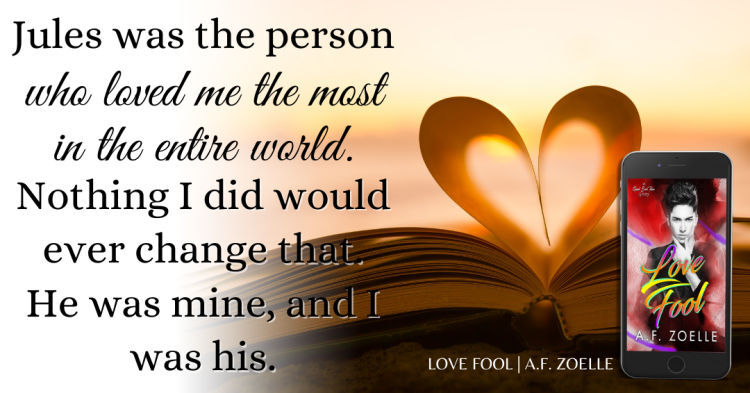 After dealing with my umpteenth disaster for the day, I had officially had it. Today could go fuck itself. So could tomorrow. I was done with everything.

The only thing that would make me feel better would be getting pounded into the mattress until I forgot about what was wrong. But I had broken up with my boyfriend, Josh, last week after I found out he had been cheating on me for two months, so that wasn’t happening. Asshole.

Since I couldn’t fuck away my stress, I went to my best friend’s apartment instead. Jules was the only person who could make me laugh, even when I was ready to burn down the world around me. He was the one constant in my life I could count on to never let me down. I could indulge my messy emotions around him without having to maintain my flawless facade of always being cool, calm, and collected. He was the only one who knew how exhausting it was for me to be perfect and make everything look easy all the time.

Jules opened the door, grinning when he saw me. He looked better in his faded jeans and lavender shirt than anyone had the right to. His mussed blond hair and bright blue eyes were quintessentially Californian, as was his laid-back attitude about all things. Without that, he’d never be able to put up with me being so uptight. Being inseparable best friends since we were eight also helped. “Is there some reason you look like you want to murder me?”

My best friend enjoyed hugging as much as most people liked sex. He didn’t need to be told twice. After he kicked the door closed, he pulled me into a tight embrace without questioning my need for it or getting mad at me for being bossy. For some reason, that never seemed to bother him.

I wrapped my arms around him, resting my head on his shoulder with a heavy sigh. For the first time since I woke up, the tightness in my chest loosened, and I could breathe again. It meant I could smell his perfume, which he always wore instead of cologne. His logic was they designed it to attract men to women, so it should bring them to him. I used to tease him for it, but I stopped after witnessing it succeed with countless guys over the years. Rather than arouse me, the unique blend of berries, patchouli, and cedar comforted me with its familiarity.

Jules rubbed my back without saying a word. For someone who could talk your ear off, he was surprisingly intuitive about when to be quiet. His calmness helped center me from the chaos that controlled my mind. He really gave the best hugs in the world.

My jaw unclenched as I relaxed into his hold. However, weariness set in as my anger subsided. It made me wish we could curl up together to get some proper sleep. I had slept like shit every night since I had kicked Josh out of our apartment. The idea tempted me, especially because Jules would do anything for me. It was probably weird that I was comfortable enough with my best friend to be fine with a platonic cuddle session, but I was too exhausted to care. I needed sleep more than I needed to respect the social boundaries of acceptable behavior amongst male friends. “Can we do this in bed?”

“Are you seriously asking to snuggle with me?” he asked in an amused tone.

I stepped out of his hold with an annoyed huff. “Listen. I’ve had a shitty day, I’m dead-ass tired, and I know it’s weird, but it would help me feel better. Please?”

“Wow, I never thought you’d beg me to sleep with you,” he teased. I gave him a pained look, which made him turn serious. “I’ll agree on one condition.”

“You have to tell me what’s bothering you.”

It was a small price to pay for comfort. “Deal.”

His eyebrows arched in surprise. “No argument or bartering? Really?” I crossed my arms over my chest with an unamused frown. “Fine, I’ll quit torturing you. Come on.”

I admired that nothing ever seemed to faze Jules. He was the only person I knew who wouldn’t bat an eyelash at my strange request. Without a word, I followed him into his bedroom.

To celebrate A. F. Zoelle’s new release, we are giving away 2 eBooks sets of the Good Bad Idea Series so far (includes 4 Books)!
Enter the Rafflecopter giveaway for your chance to win!

Check out the rest of the
A Good Bad Idea Stories

I went to Las Vegas to marry my fiancée but ended up married to my best man instead. Considering I’m straight, I never imagined I would wake up in bed with a husband. We obviously need to get an annulment to undo our mistake. The only problem is, it turns out my feelings for my best friend Luci aren’t quite as platonic as I thought.

What are the odds that my bad idea ends up being the best thing to ever happen to us?

After Rhys and I secretly shared our first kiss as teenagers, I spent years suppressing my confusing feelings for him. But now that he’s my husband, it exposes the truth about the depths of my love for my best friend.

Could I really be lucky enough that he feels the same way about me?

Bet on Love is the first book in the Good Bad Idea series. This novella features a friends to lovers second chance romance. Full of cute sweetness and sexy fun, every story ends with a satisfying HEA and no cliffhangers. Each book can be read as a standalone or as part of the series in order.

AMBROSE O’ROURKE
I’ve only met one person I couldn’t seduce—Augie Murphy, the man I love who thinks I’m straight. When I have a chance to be his fake boyfriend, it’s too much temptation to resist. It turns out that’s literally true, since I get carried away with a passionate kiss. He thinks it’s just a game, but it’s so much more than that.

Can I convince my best friend I want to be his boyfriend for real?

AUGUST “AUGIE” MURPHY
Ambrose is handsome, irresistible, and completely off-limits. That didn’t stop my stupid heart from falling in love with my best friend the first day we met. When he suggests we pretend to be boyfriends on a double date, my curiosity defeats my common sense. Even if we’re only pretending for one night, I want to know what it’s like to be loved by him.

Is it possible to turn my fake boyfriend for a night into my real one forever?

Love Means More is the second book in the Good Bad Idea series. This novella features fake boyfriends in a friends to lovers bisexual awakening romance. Full of cute sweetness and sexy fun, every story ends with a satisfying HEA and no cliffhangers. Each book can be read as a standalone or as part of the series in order.

A twenty-year-old like me doesn’t stand a chance with an older playboy like Rune. Yet despite being total opposites, I’m lucky enough to call him my friend. Anything more than that would be greedy, but that doesn’t stop me from wishing he would teach me how to satisfy the passionate desire I feel for him. All of my fantasies are about experiencing my first time with him.

Could I be lucky enough that it happens for real?

The only relationships I used to be interested in were meaningless hookups with no strings attached. But Callum’s kindness touched a part of my heart I didn’t know existed, changing me forever. I desperately want him, but he deserves to be cherished by someone who thinks true love is real and isn’t a jaded thirty-year-old like me.

Can he really turn a sceptic like me into someone who believes we could have a romantic happy ever after together?

Fancy Love is the third book in the Good Bad Idea series. This novel features a grumpy/sunshine, age gap, first time, opposites attract romance. Full of cute sweetness and sexy fun, every story ends with a satisfying HEA and no cliffhangers. Each book can be read as a standalone or as part of the series in order.

Under constant siege from persistent plot bunnies, A.F. Zoelle enjoys humoring them by writing about gorgeous men being in love. Her contemporary romances are full of witty banter, sexy fun, and lovable smart-asses. She’s left academia behind for a new adventure, which will hopefully include adopting Ragdoll cats of her own someday soon.