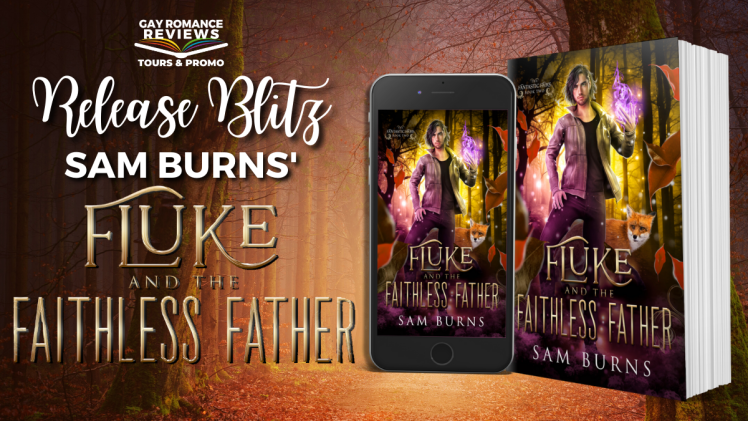 Fluke and the Faithless Father
By Sam Burns 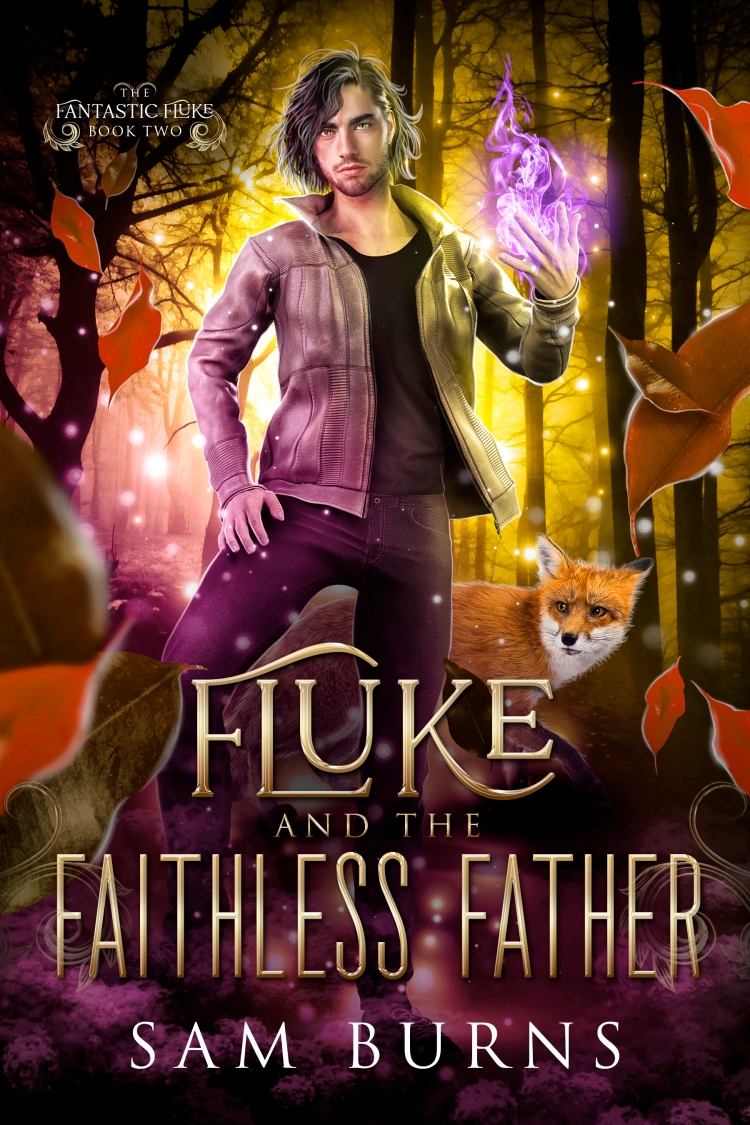 After escaping a murderer and resurrecting his boyfriend, Sage figures he deserves a little time to recover.

So instead of a break, he gets to deal with a magical law enforcement rookie asking uncomfortable questions about his brush with death. The quaesitor is acting downright suspicious. Or is it suspiciously?

Things go from awkward to dangerous when the man who murdered Sage’s mother is released from prison, and soon after there’s a break-in at the bookstore. The situation escalates so fast that Sage is afraid he’s going to end up with whiplash. Or worse, end up dead. He wanted a break, but not a permanent one.

Fluke and the Faithless Father is a direct sequel to The Fantastic Fluke, and should not be read first. It is an ~85k word novel that follows the continuing adventures of Sage, Fluke, Gideon, and their whole family, found and otherwise.

I took the sodas back into the other room, passing them out and sitting back down next to him as Beez stared wide-eyed. “So you’re saying that storybook magic is real, and Sage is like freaking Merlin or something?”

“No,” I waved a hand at her dismissively and scoffed, then cracked my soda open to take a drink.

No one else said anything. Beez just kept looking at Gideon, who glanced at me, then back at her, and shrugged and nodded.

I almost spit my drink out, glaring at him. “Don’t convince Beez I’m some kind of super mage. I can still barely access the ley lines, let alone do what I want with them.”

“Let me guess,” Beez said, looking me in the eye. “You’re trying to use gasoline to light matches?”

And that was a distressingly correct take on something she didn’t know much about. I shrugged. “It’s control. I never had enough ability to worry about it before, and now, you know, I still don’t have it. I keep treating it like I did before, trying to grab it as hard as I can and squeeze everything I can out of it, only . . .”

“Only before you had a defective faucet and now you have a firehose.” Beez sighed, opened her soda, and downed half of it before looking at me again. “Honestly, I don’t know why I’m surprised. It always felt weird that you weren’t powerful. Mal is class four, and it’s whatever to them. It doesn’t affect their life all that much. But magic was always so important to you, and you didn’t have it. It was like someone was telling your story wrong.”

“Yeah, well, telling is part of the problem. Did Gideon tell you the part that comes next? With the nutty people who believe that ley lines are evil, the people who use them are ‘witches,’ and they have to murder us?”

For a moment, Beez just sat there, blinking at me. Then she sighed, sounding more irritated than anything else. “Of course they do. Why can’t things just be good? Why isn’t it ever, ‘Look, awesome magic, it must be a boon to all humankind!’? No, it’s always got to be evil and require murder.”

She slid down onto the carpet next to me and wrapped an arm around my shoulders. “On the other hand, you’re kind of Merlin.” I opened my mouth to point out how silly that was, but she held up a hand. “Sage. You brought a man back from the dead. If that’s not Merlin-level shit, then what is?”

To celebrate the release of Fluke and the Faithless Father, Sam’s giving you a chance to win 1 of 2 e-sets of The Fantastic Fluke Series so far (2 e-books included)! Two winners will be chosen!

Sam is an author of LGBTQIA+ fiction, mostly light-hearted fantasy romances. Most of her books include a little violence, a fair amount of swearing, and maybe a sex scene or two. Oh yeah, and a fox. Don’t forget him.