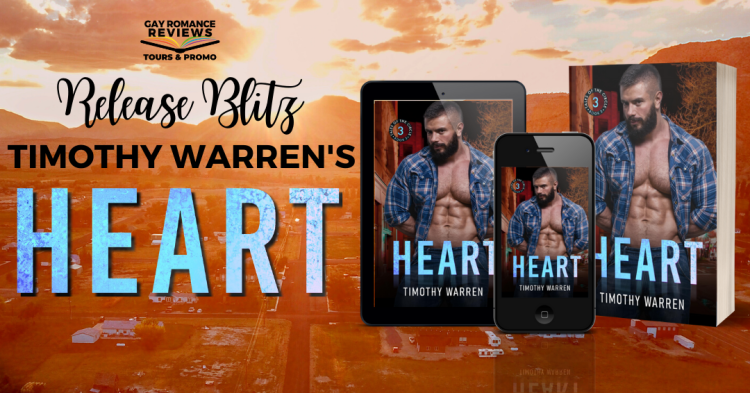 Tales of the Circle, Book 3

Chef, George Patras, is embracing life again. It’s been two years since David’s death and to honor him he’s opening a restaurant in his name.

Michelangelo Napolitano is a sweet bear of a guy, known in Dupont Circle as the singing mailman. He’s cute, funny, bold, impulsive, and light on his feet—one of which is often in his mouth.

George’s restaurant is on Mikey’s route. They see each other daily, yet date the wrong people. Will they ever see they’re perfect for each other?

There’s more Circle magic in this romantic comedy of blind dates, new love, and a whole lot of HEART.

Heart: Tales of the Circle Book 3, is a romantic comedy set in the gayborhood of Dupont Circle, in Washington, DC. It features characters from prior novels in the series that may enhance your enjoyment, but can easily be read as a standalone.

George stood, holding the adjoining barstool for support. Wobbly, he went into the kitchen. Zac was there. He looked up from plating salads.

“Yeah,” said George. “Jack and May made me drink some ouzo.”

“I know,” George said proudly, punctuated with a hiccup. “I can feel it.”

The door jingled from out front.

George threw his hands up. “And they just keep on coming.”

“Let me get you some water.”

Zac found a paper cup and made for the sink.

“George,” came a familiar accent from behind them. It was Mikey, peeking his head in the kitchen.

Mikey entered with roses. “I wanted to congratulate you on the opening.”

George went to him, embracing him in an overzealous bear hug, smashing the bouquet between them. He lost his balance, falling backward. Mikey reached, dropping the flowers and George caught his hands, pulling him with him. They both went crashing into the kitchen island.

“Whoopsie-daisy!” said Mikey, chuckling. He bent down, retrieving the rose bundle, placing it on the island’s silver surface. George pulled him close.

“Mikey, my sweet, Italian brother. Thank you for the beautiful flowers. You’re such a gentleman.”

“It’s the least I could do, George. I just want you to know I’m here for you.”

George kissed him, their lips colliding sloppily. Mikey tried to withdraw and George squeezed him tighter, his hands moving up and cupping the back of his head, smashing their faces together, relishing the friction of his beard, the plush velvet of his sweet lips. Mikey caved into George’s embrace, pressing, pinning him up against the stainless steel counter. His tongue came out to play and George welcomed it with a chuckle.

When they separated, it was Mikey who looked drunk.

“Whoa,” he said. “Wasn’t expecting that. You taste like candy, George.”

“It’s the ouzo,” Zac said, returning with the cup of water. He handed it to George. “He’s nervous. May gave him a shot of ouzo.”

“Opa!” Mikey said with a grin.

“Opa! Did I tell you that I have a low tolerance for alcohol, Zac?”

“No, but I can see that.” He returned to the salads.

Mikey whispered, “I’ll have to remember that next time I want to take advantage of you.”

“You already took advantage of me,” George said. “But that’s OK. I kinda liked it.”

To celebrate the release of Heart, we are giving away an e-set of Tales of the Circle so far (3 books; True, Secret & newly released; Heart).

Timothy Warren lives in the Atlanta suburbs with his husband and their pets. When he is not writing, he is writing in his head… which often leads to strange looks from his spouse.

He loves writing about things that make him smile–the chemistry between men, in particular. Sex plays a big part in these relations, but love wins out more so with his enjoyment of telling these stories… as in life.

“I like to write about men being men and falling in love with men. And I love a happy ending.”