Alfie Hope’s life is perfect. Managing Darley Hall for an employer who hasn’t visited the house in five years. It’s more than a job, it’s his home. A safe haven for him and the staff he considers family. That is, until their master passes away and a new master inherits. A new master who wants to live in the house.

Jolyon Mortimer Devereaux was stunned when he inherited Darley Hall. It offered an escape from his life, his lover, and his awful family. He arrives to find an estate manager who is outrageously handsome in a gentle, yet rugged way, but someone who clearly has never been a servant in his life!

Alfie and Jo grow tentatively closer. That is until a shock Christmas arrival blows everything wide apart, leaving Alfie and Jo struggling to hold on to their love. It will take a Christmas miracle to hold them together. 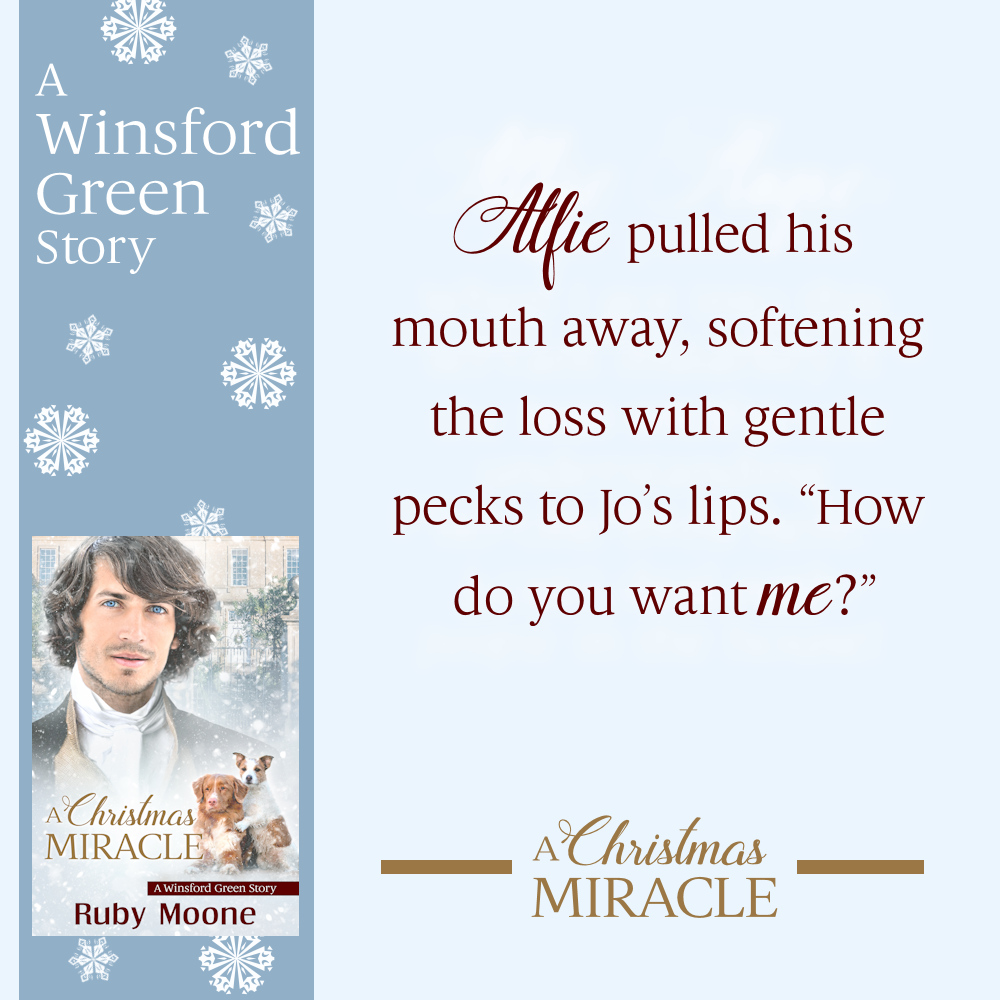 It was the distinct lack of deference in the servant standing before him that alerted Mr. Jolyon Mortimer Devereaux that all might not be well in his newly discovered ancestral home, Darley Hall. Granted, no-one had expected him to inherit. It had taken a war with France and an outbreak of fever to dispense with several members of his extended family, leaving the entire estate to someone from a largely unknown cadet branch of the family: him.

Jo looked at the man standing before him, Mr. Hope, if he recalled correctly. The man would be better suited to prize fighting or running a tavern in the seedier side of London. A tall, burly young chap with straggly dark hair roughly scraped back in an unfashionable queue with one strand hanging by his cheek. Shifty, dark blue eyes and a blade of a nose that had clearly been broken, more than once, completed the ensemble. A potentially charming dimple lurked in one cheek when he smiled, but Jo paid it no attention. He was far too exhausted.

“Mr. Devereaux.” Hope nodded his head in some approximation of a bow and shifted uneasily on his feet. “We only received word of your arrival yesterday, but we have made every effort to ensure your comfort.” His words were as stilted and uncomfortable as his bow. Had Jo been a stickler, or less exhausted, he would have been significantly more concerned than he currently was.

“A light meal and a bed will suffice. We can discuss arrangements tomorrow.”

“Have you brought staff, sir?”

Jo shook his head. “Are there staff in residence?”

Hope looked even shiftier and rubbed the back of his neck. “Yes sir, we’ve kept the place tidy and stopped it falling apart as best we could, but no-one has been here this last five years. Old Mr. Mortimer lived in London and never came here.”

Hope nodded with a smile.

Thank God for that. If he’d have had to mess about finding staff… Jo sighed. “Then I’ll manage.”

“Um… I can take your bags to your chamber and arrange for some refreshment?” Hope hesitated. “Sir,” he added after a moment.

“If the room is ready, I’ll take refreshment in there.” He sincerely hoped that there was a good fire in the bed chamber, for the weather was damnably cold even for November and the parlour in which he stood was perishing despite the fire crackling in the grate.

Hope gave him a nervous smile. “Um… it will be … Have a seat and I’ll bring you some tea whilst I sort it out.” He gestured to a chair by the fire.

Jo blinked and quelled the bubble of hysterical laughter that threatened at the sheer informality of the man.

Dear God, what on earth had he got himself into? The man was barely civilised and certainly didn’t recognise sarcasm. “Mr. Hope?”

The man turned around with eyebrows raised in enquiry and a smile that revealed the dimple. Despite his exhaustion, Jo didn’t miss the fact that the man’s gaze took him in from head to foot.

“What did you say your role in the household was?”

Jo couldn’t say he was entirely surprised. He waved the man away and slumped into the chair closest to the fire and closed his eyes. 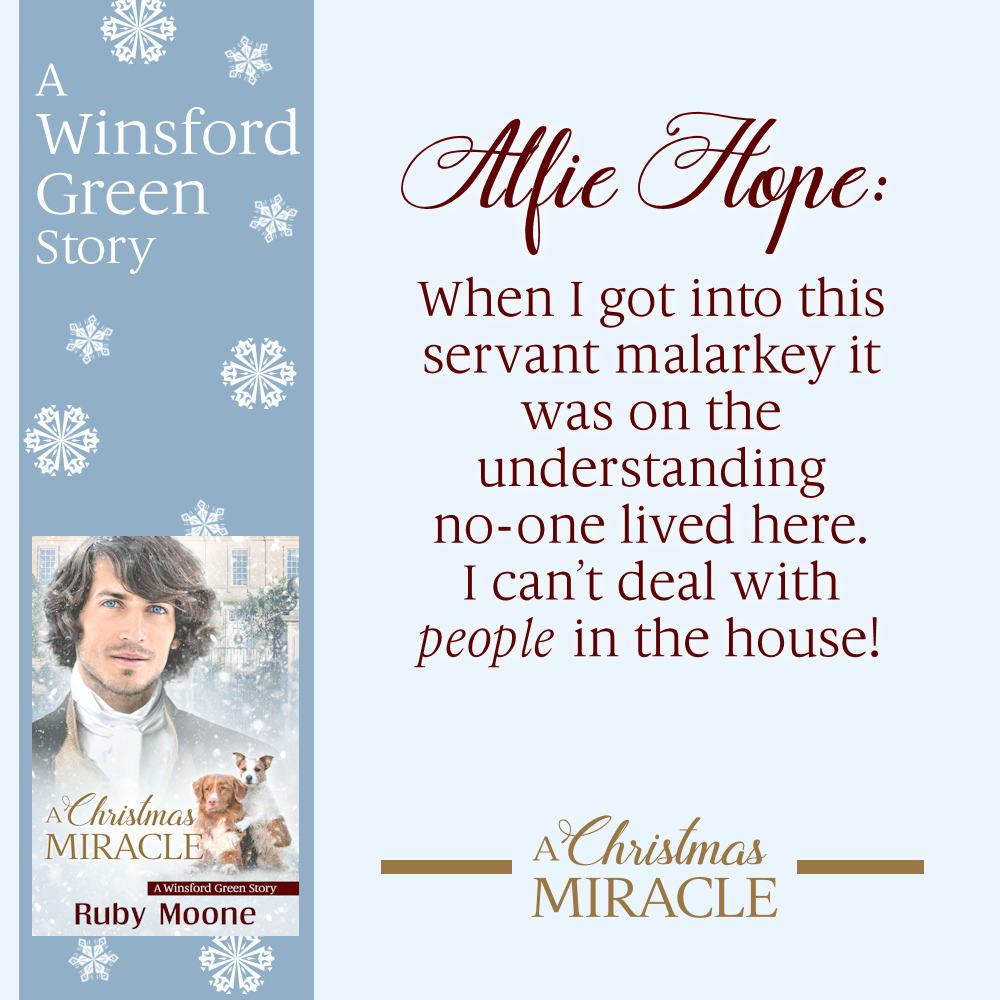 To celebrate the release of A Christmas Miracle, Ruby is giving away an e-sets of Winsford Green Series so far (4 ebooks) 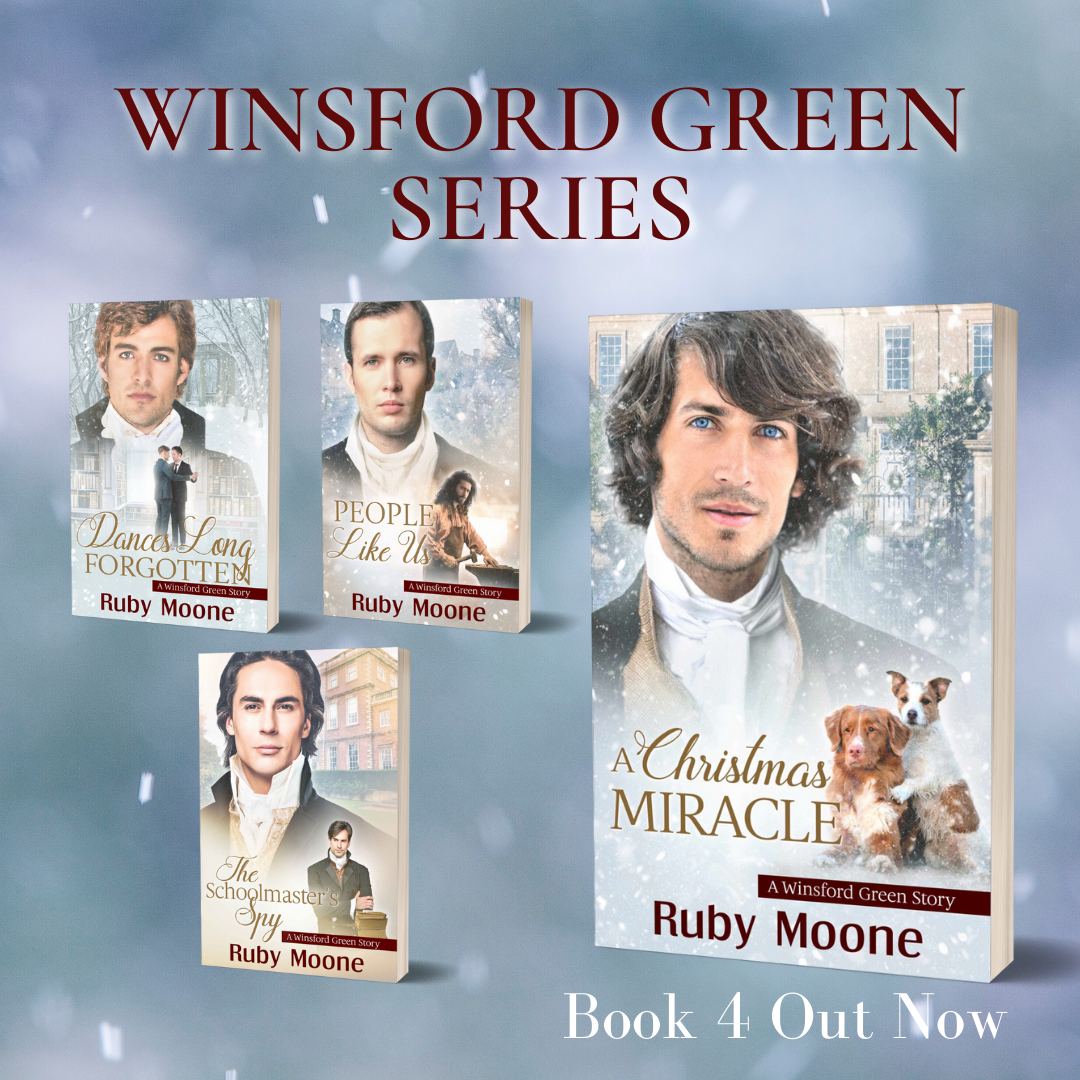 Go back to where it all began with Book 1 in the Winsford Green Stories: Dances Long Forgotten 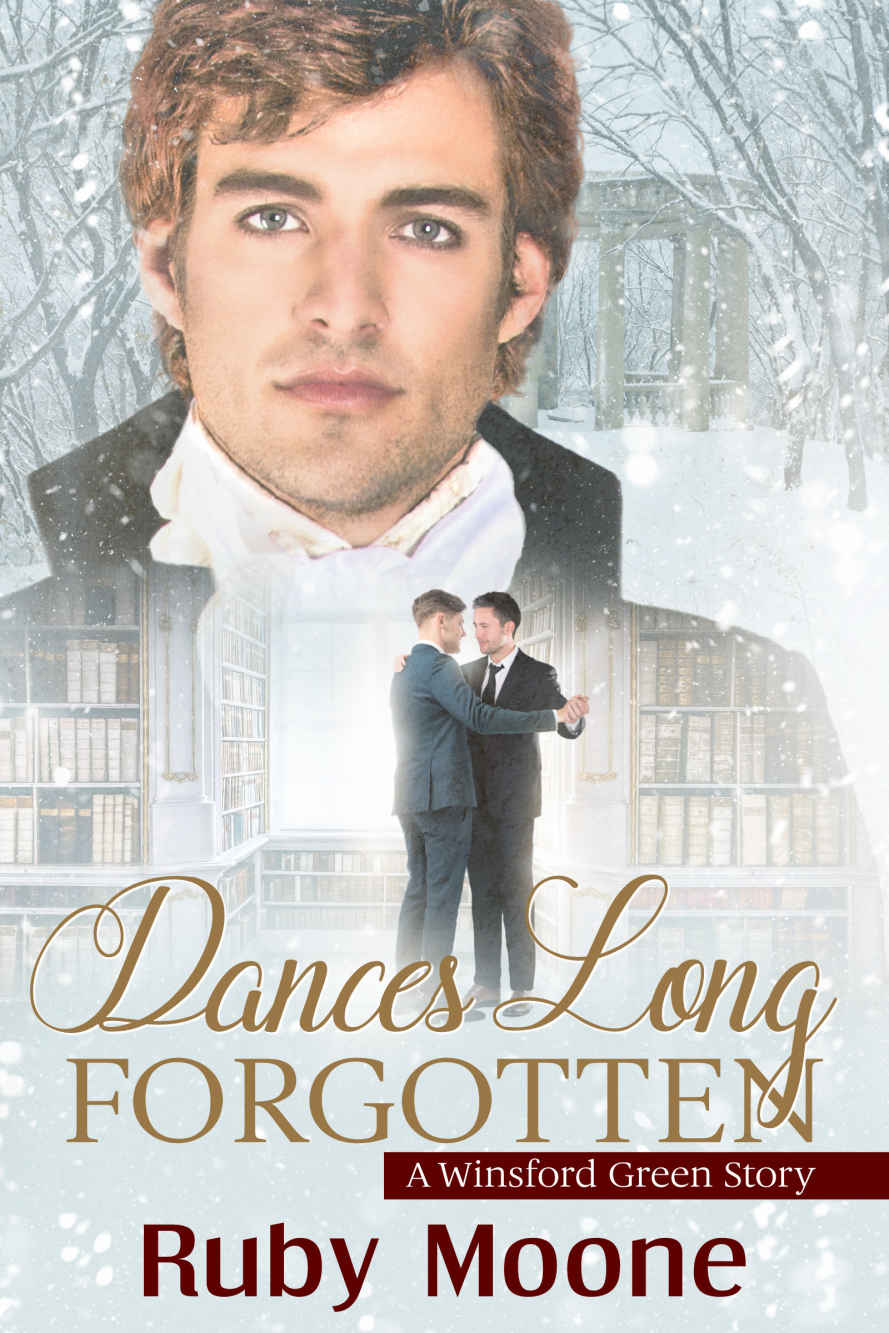 On Christmas Eve, Dylan, the man of James Pell-Charnley’s dreams, is on the point of walking out. Then they hear the faint strains of a waltz in the library of the empty abbey. The music is said to be heard only by those truly in love, and it gives James the courage to tell Dylan the story.

In December 1841, Lord Hugo Pell-Charnley is in a terrible mess. The youngest son of the late Marquis, youngest brother of the incumbent, never felt to fit. When his life comes crashing down, and his life and his family are threatened, he is forced to face his elder brother and confess his deepest secret. When he arrives at Winsford Abbey he finds he must also confront the shame from his past in the form of Lyndon Cross. The boy he’d loved but betrayed in school.

As they clear the ghosts from the past, they dance in each other’s arms in the library to the soft strains of the waltz, but long buried secrets threaten to destroy their happiness. Two hundred years later, can those dances long forgotten give James and Dylan the courage to hold on to love? 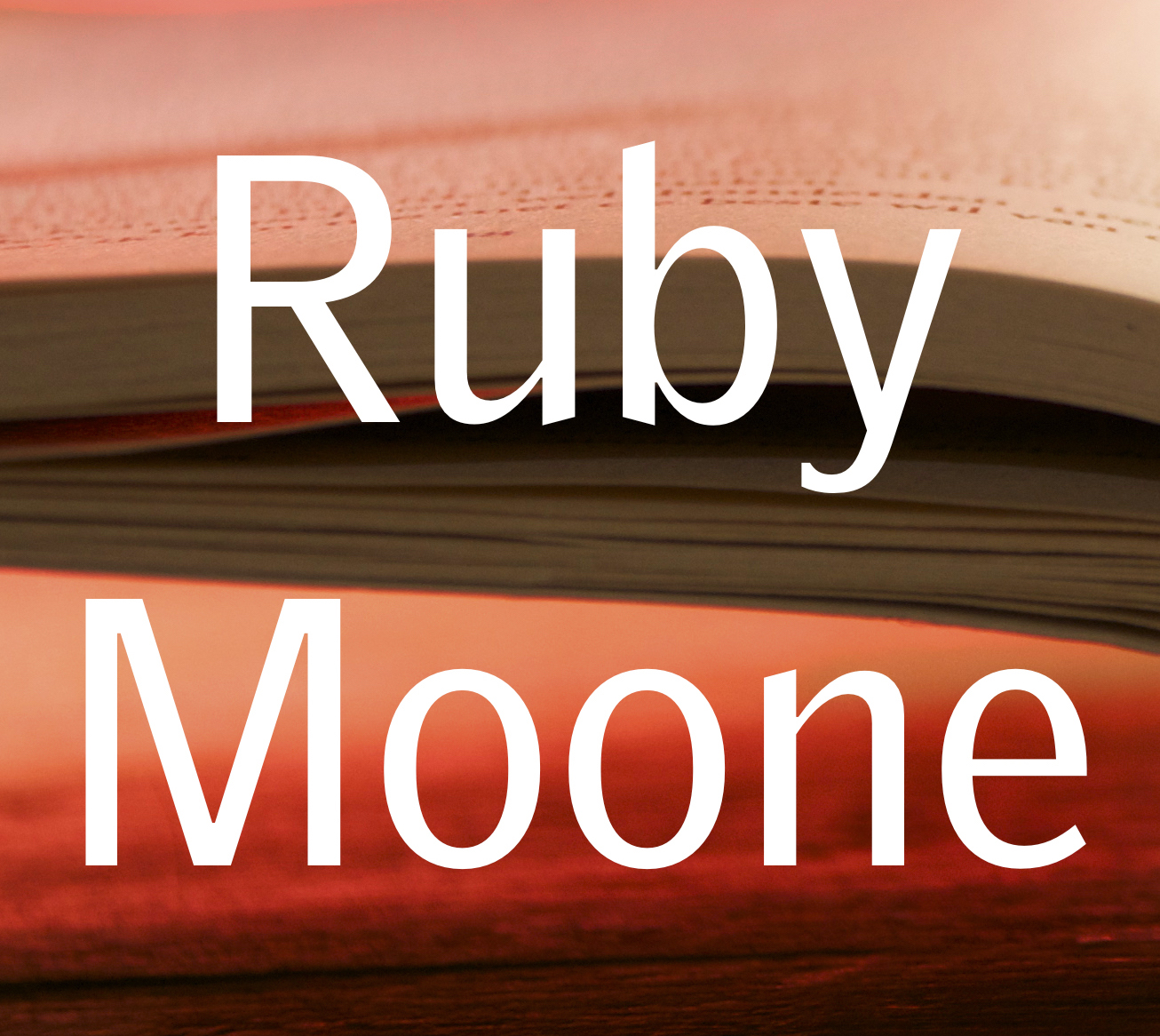 Ruby Moone lives in the wilds of Lancashire with her husband and writes historical and contemporary romance. At school, her teachers said that she lived with her head in the clouds and if she didn’t stop daydreaming she would never get anywhere. She never did stop daydreaming, and after years of happily living in the clouds, decided to write the stories down.