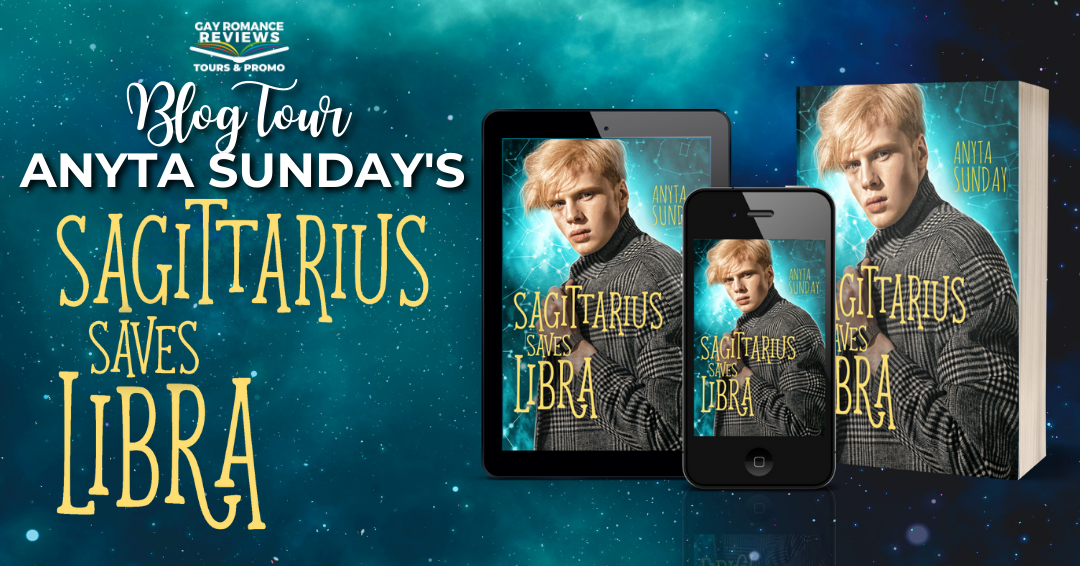 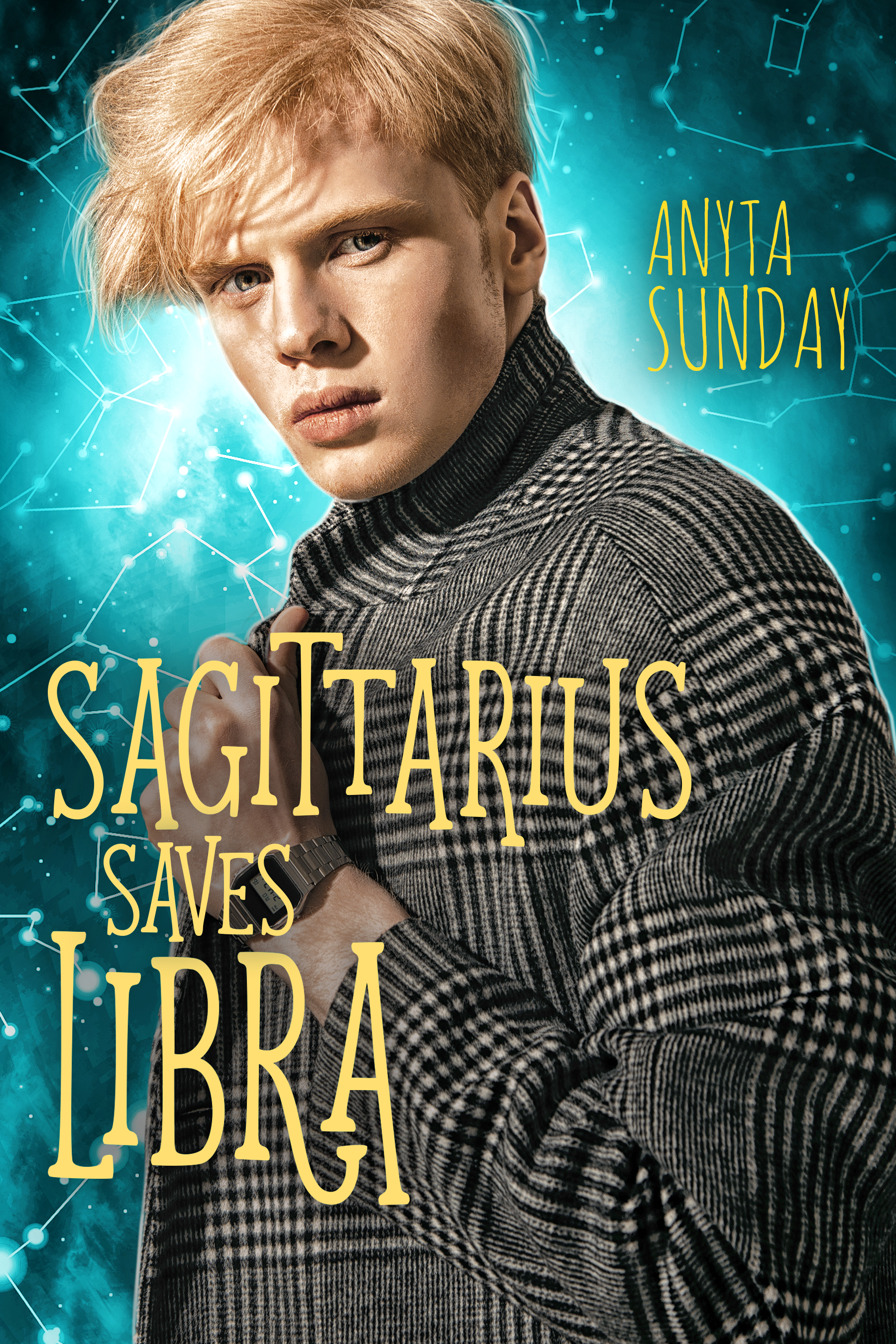 True love is on the horizon, Sagittarius. It’s a good time to step out of your routine and into the unknown.

Jason Lyall wants someone to come home to, someone he can be his most ridiculous self with. Someone who loves him regardless. But no matter how hard he tries, he can never quite make that connection, and now his last girlfriend has moved on—she’s engaged.

So when his identical twin begs him to swap lives for a few weeks, Jason can see the appeal. Suddenly he’s living another life in a tiny Australian town, contending with weird, wild, and wonderful things the likes of which he’s never encountered before. Like spiders. Like snakes.

Like his new neighbour, Sergeant Owen Stirling, who is all kinds of . . . suspicious.

Prepare to be caught in a merry mix-up, Libra. It’s a dance of side-stepping and seduction.

Check out the rest of the series

He used to be vibrant. Full of energy. All colour on a grey day.

Not that he could really complain. He was an accomplished pianist, he’d travelled the world, performed with international orchestras, he had his own home. It was just . . .

He pushed the vision of happy Caroline out of his mind, laughing at himself. Pull it together.

He waved to his brother from the gate and closed it behind him. Tall lavender either side of the path bent with another gust. Carl pushed off the porch chair and rose to his feet.

It always did, seeing his brother. It wasn’t any one particular feature that momentarily shook Jason; it was the combination. Carl was medium height, his smile dimpled either side of his cheeks, his bright blue eyes thickly framed with black lashes. A slightly upturned nose gave him a cute air, and there was a tiny freckle at his jaw.

It was Jason’s face. His exact face.

He’d be used to it if they’d grown up in the same family, but Jason and Carl had met accidentally three years ago, when Jason had performed Bach and Chopin in Sydney. One of those Holy Shit moments that rarely happen in life, and he’d never thought would happen to him.

Carl was his twin.

After the initial shock, they’d swapped stories, speculated, and hired a private detective to probe into the matter. They learned they’d been born to a teenage mum whose aunt had adopted one of them. The other—Jason—had been put up for adoption.

Since then, they’d loosely kept in touch, but other than genetics he and Carl had little in common—not even a birthday, since Jason was born on December 21st and Carl on the 22nd, fifteen minutes later. Carl showing up short notice like this . . . it was a bit mind-boggling.

It seemed more the sort of out-of-left-field type of thing a Sagittarian would do.

In fact, this visit reminded Jason of the Jason he used to be.

The Jason he wanted to be again.

Before another ache could take him hostage, he smiled and opened his arms for an awkward embrace. Carl laughed, and the rhythm of it—just like his own—set off another wave of goosebumps.

Jason withdrew and let them inside. Carl peeked around the villa’s airy rooms with their sparse, elegant furnishings, while Jason uncorked a much needed bottle of wine. His eyes flickered between bottle and brother.

There were a few differences between him and Carl, of course. Carl kept his hair shorter and had developed more bicep, judging by the fit of his shirt. And their styles were at opposite ends of the spectrum. Carl’s was casual: baggy jeans, T-shirt, an open flannel shirt over that. Sturdy workman’s boots. Jason preferred tight jeans, cashmere pullovers, colourful scarves. Ankle boots. Suits, when he was performing.

Carl hummed and finally strolled to the kitchen island. He took up one of the wineglasses like it was a pint and chugged half of it down.

Jason raised a brow. “To what do I owe the pleasure?”

Carl said “I had to get outta Earnest Point” in his mildly Australian accent.

“Earnest Point” was Carl’s small hometown in Tasmania, but there were hundreds of places he could have escaped to. Flying two connections to Wellington . . .

Carl tossed back the second half of his drink. “My ex is spontaneously getting married in three weeks. He wants me at the wedding.”

He. Carl had mentioned a boyfriend before; every time, a little shot of something curled around Jason’s belly.

Carl’s brow furrowed as he stared at his empty glass. Jason sensed pain under the intense glare and poured him more wine. “Sounds like an uncomfortable situation?”

“Small community, y’know? Everyone knows everyone. Pete and I ended things pretty neat. And Nick’s a good bloke. I’ve been keeping it together in front of them, so if I suddenly said no, it wouldn’t look good.”

“Could you make something up? Work related, maybe?”

There was something beseeching in Carl’s expression that had Jason’s pulse ticking wildly.

He pinched the stem of his wineglass. 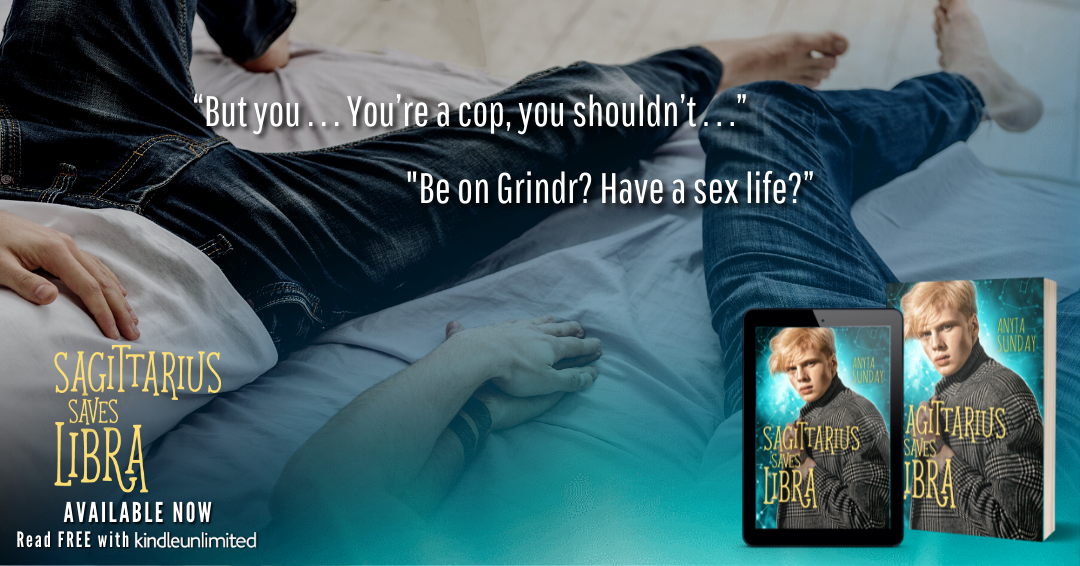 To celebrate the release of Sagittarius Saves Libra, Anyta is giving 3 e-sets of Books 1 – 5 of the Signs of Love Series!

A bit about me: I’m a big, BIG fan of slow-burn romances. I love to read and write stories with characters who slowly fall in love.

Some of my favorite tropes to read and write are: Enemies to Lovers, Friends to Lovers, Clueless Guys, Bisexual, Pansexual, Demisexual, Oblivious MCs, Everyone (Else) Can See It, Slow Burn, Love Has No Boundaries.

I write a variety of stories, Contemporary MM Romances with a good dollop of angst, Contemporary lighthearted MM Romances, and even a splash of fantasy.
My books have been translated into German, Italian, French, Spanish, and Thai.

Sign up for Anyta’s newsletter and receive a free e-book: http://www.anytasunday.com/newsletter-free-e-book/

You can also find me here:
www.anytasunday.com
[email protected]

For information about new releases and freebies, follow me on BookBub:
https://www.bookbub.com/authors/anyta-sunday